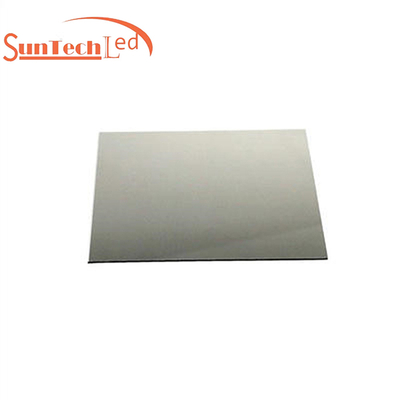 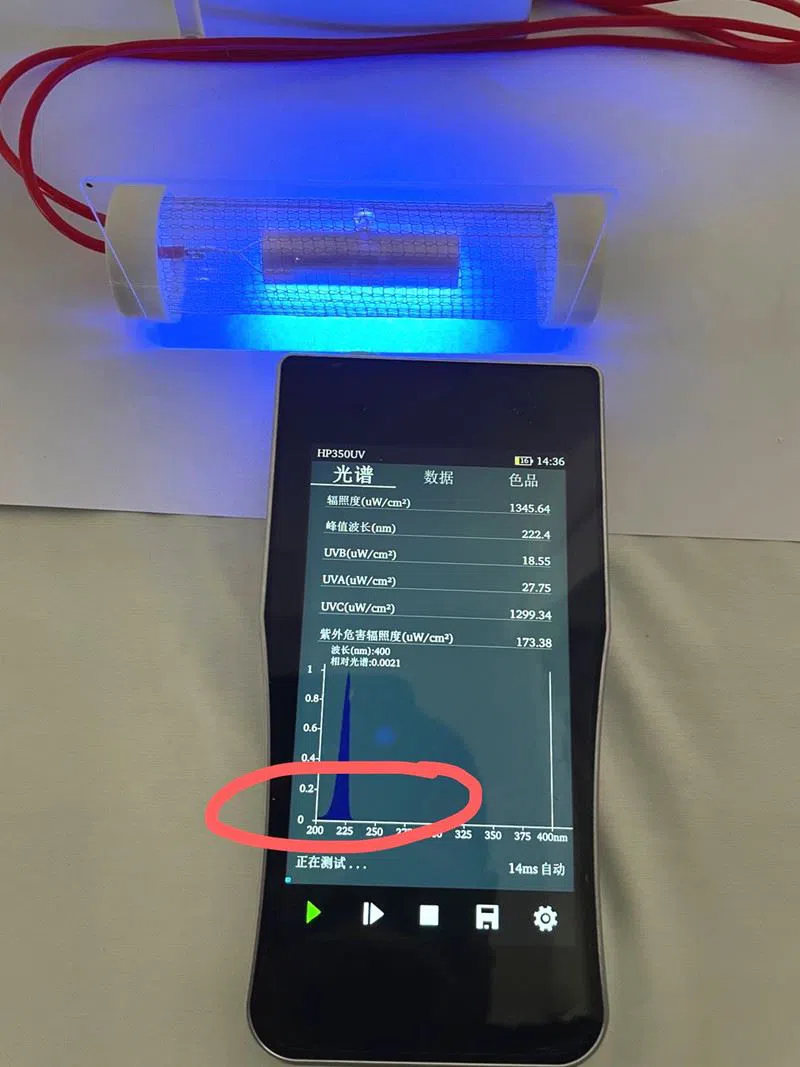 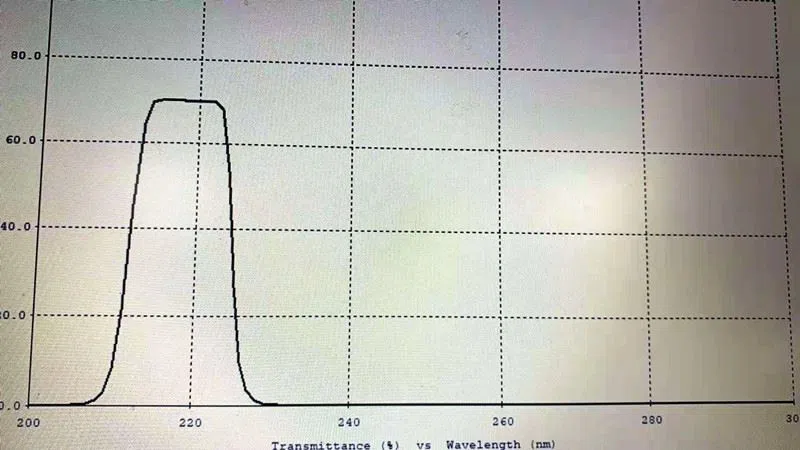 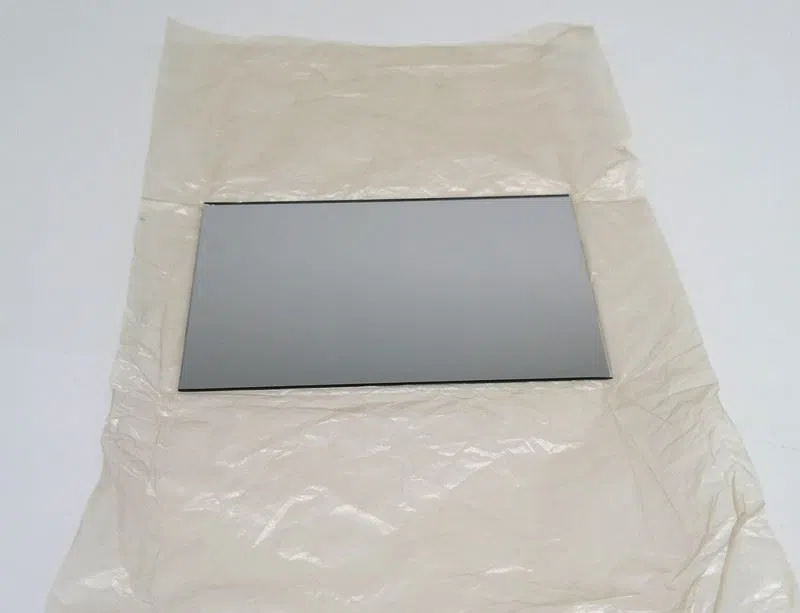 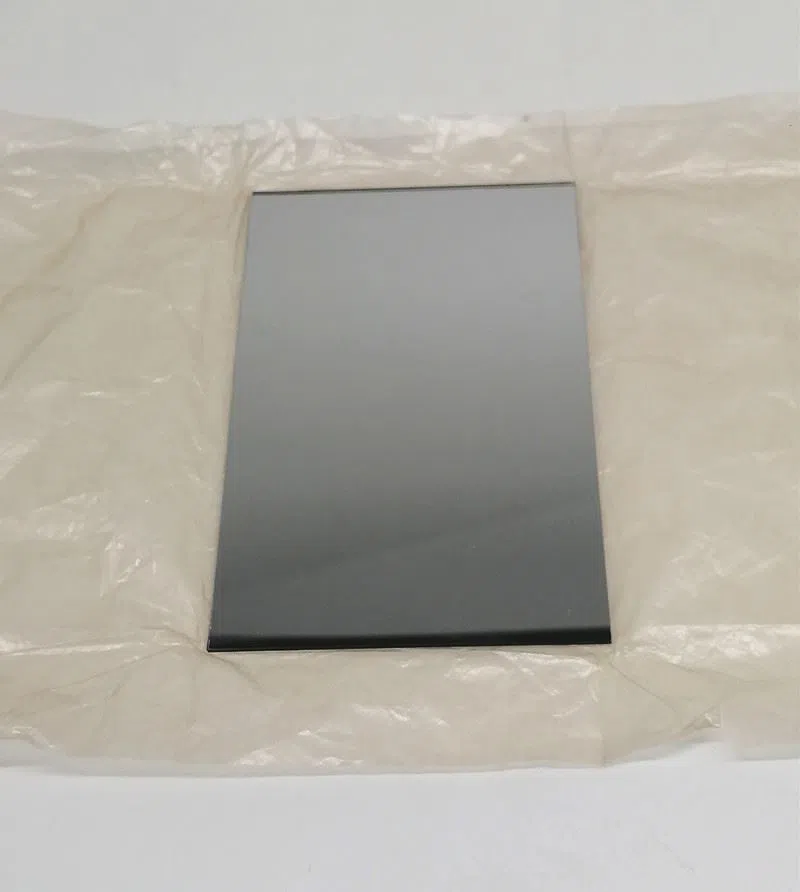 Why need a bandpass filter for the 222nm far UVC excimer lamps?

Ultraviolet (UV) light has been used effectively for line-of-sight sterilization of rooms, objects, and skin for over a century, but these higher energy photons can also cause severe sunburn and skin cancer. Fortunately, UV light at 222nm is capable of sterilization without harming human skin, making it a safe and effective technology to combat bacteria and viruses, including COVID-19.  Optical filters can be designed to transmit the desired UV frequency while blocking the harmful wavelengths.

The UV section of the electromagnetic spectrum lies between x-rays and visible light, from 100nm to 400nm. British researchers Arthur Downes and Thomas Blunt discovered the sterilization properties of UV light in 1878 and Danish doctor Niels Finsen won the 1903 Nobel Prize in Medicine for employing UV light in the treatment of skin disease.

When high energy photons in the 100nm to 315nm range are absorbed by living organisms, they partially destroy the cellular DNA. A cell having damaged DNA cannot function effectively; they lose their reproductive capacity and eventually die. Consequently, UV light is considered to be an extremely effective method of killing bacteria and viruses. Several studies have determined that the UVC range of 200nm to 280nm is most effective for sterilization. They have also concluded that some UV radiation causes damage to human skin.

Research has shown that emission at 222nm from an excimer lamp is capable of sterilization without penetrating to the skins basal layer. To prevent harm to the patient, the emission spectrum needs to be filtered to suppress the damaging longer wavelengths that are capable of dermal penetration. This can be achieved using a suitably designed UV bandpass filter.

Our UV bandpass filter capable of  60% transmission at 222nm and blocking of the longer wavelengths up to 280nm (see chart above). Our filters(210nm 220nm 222nm far UVC bandpass filter narrowband optical filter) can be supplied in custom sizes for integration into a variety of lamp configurations. 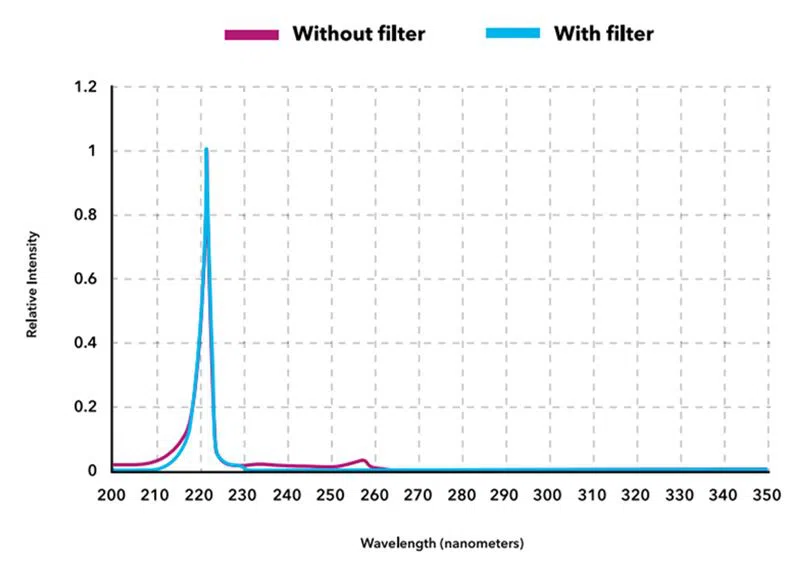 A Sterilray disinfectant source (222 nm) conventionally used to sterilize equipment and work surfaces was assessed for tolerability in human skin. Using an escalating dosage study methodology, four skin phototype I and II healthy volunteers had their minimal erythema dose (MED) determined. Punch biopsies of irradiated sites were stained for cyclobutane pyrimidine dimers (CPD). The degree of CPD was compared with that in biopsies from unexposed skin and from areas exposed to UVB (280–315 nm) radiation.

Calibrated spectral measurements revealed emission at a peak wavelength of 222 nm with 97% emission at wavelengths less than 250 nm. At low doses below the threshold bacteriostatic effect, the source was capable of inducing both erythema and CPD formation in human skin. In two individuals, cells in

the basal layer were not shielded by the overlying tissue as indicated by the presence of CPD. The source showed an erythemogenic or CPD potential at lower doses than those required to reach the reported threshold bacteriostatic effect.

We have investigated both the erythemogenic and CPD formation potential of the UVC emitting Sterilray device. The inter-individual results were remarkably consistent. The background purpose was to link the dose of this source capable of producing erythema to the dose known to have a bacteriocidal/static effect. UVC is strongly absorbed by proteins and nucleic acids and causes skin damage (Trevisan et al., 2006). Previous studies in mice have demonstrated antimicrobial effects at doses that did not cause significant damage to the host tissue but did cause detectable CPD [250–260 nm UVC]. Little is known about the effects of wavelengths < 250 nm. One group have used human skin equivalents to demonstrate MRSA cell killing by a filtered 207 nm radiation source with doses that did not induce detectable CPD. In the present study the photophysics quality control was carefully conducted. Eighty-eight percent of the UVC was within the 222 nm waveband, but there was a tail of low level emission extending to longer wavelength UVC. Although 97 % of the UVC was emitted at wavelengths shorter than 250 nm, there is the possibility that longer wavelength UVC contributed to the effect.

The histopathology results showed evidence of CPD formation after irradiation with Sterilray UVC. In the case of the UVC irradiated skin, the CPDs tended to be more superficial but were present in the basal layer of the suprapapillary plate region. CPDs are probably responsible for most of the DNA-damage–mediated effects of sunlight. The staining pattern observed correlates with the clinical spectrum of tumours recognized to occur in the setting of actinic damage, which encompasses a range of carcinomas of epidermal and adnexal origin together with tumours from the connective tissue elements such as atypical fibroxanthoma/pleomorphic dermal sarcoma and also angiosarcoma.

The pattern of immunostaining for CPDs differed from UVB, in that the intensity of the staining was less marked and more superficial with no clear evidence of damage to the dermal constituents. The most important question is whether or not there is evidence of CPD within the basal layer keratinocytes. For a treatment or procedure to be safe, then the basal layer should show no evidence of dimer formation.

Two of the four subjects showed no sign of basal layer dimers. However, the remaining two subjects showed a more pronounced pattern of epidermal rete ridges with epithelial thinning over the suprapapillary plates; and where the epidermis was thinned UVC exposure did result in basal CPD formation.

The skin samples for this study were from the back, and it is worth noting that the rete ridge pattern at acral sites (such as the palm) is likely to be even more pronounced as this binds the epidermis more firmly to the dermis to counteract frictional forces. This suggests that in hand skin, if UVC exposure was employed to reduce microsurface organisms, then potentially mutagenic damage to the basal layer keratinocytes would occur particularly within the thinned suprapapillary plates. There might be some filtering out of the damaging effects of UVC by the thicker corneal layer on palmar skin but DNA damage might still occur at other less cornified sites such as the dorsal hands and wrists.

These data, when combined, suggest that not only is erythema inducible using the UVC emitting

Sterilray, but also that DNA damage in the form of the skin cancer–associated CPDs, has also been induced. These events are occurring at Sterilray dosage levels below the threshold for bacteriostatic/cidal effects suggesting that frequent, several times daily, use of Sterilray irradiation is unlikely to be tolerated as a non-chemical antiseptic for human skin. 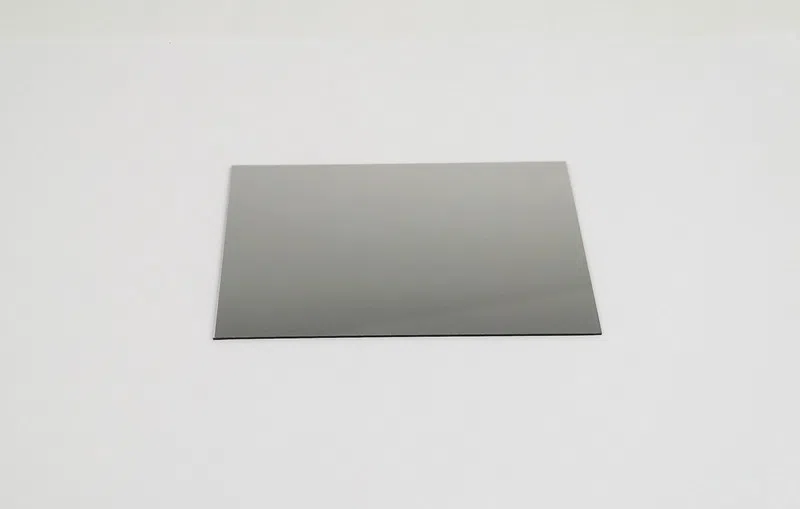 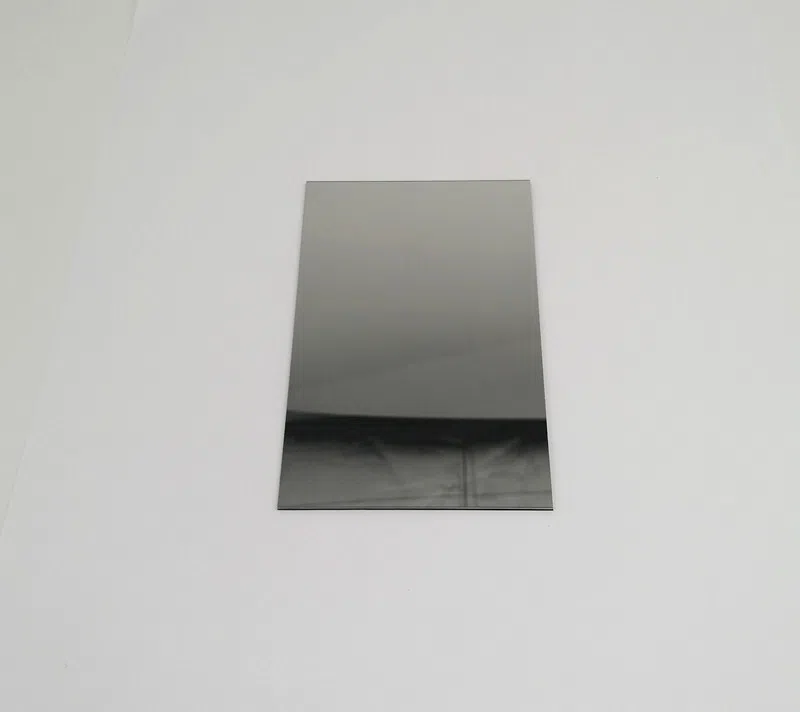 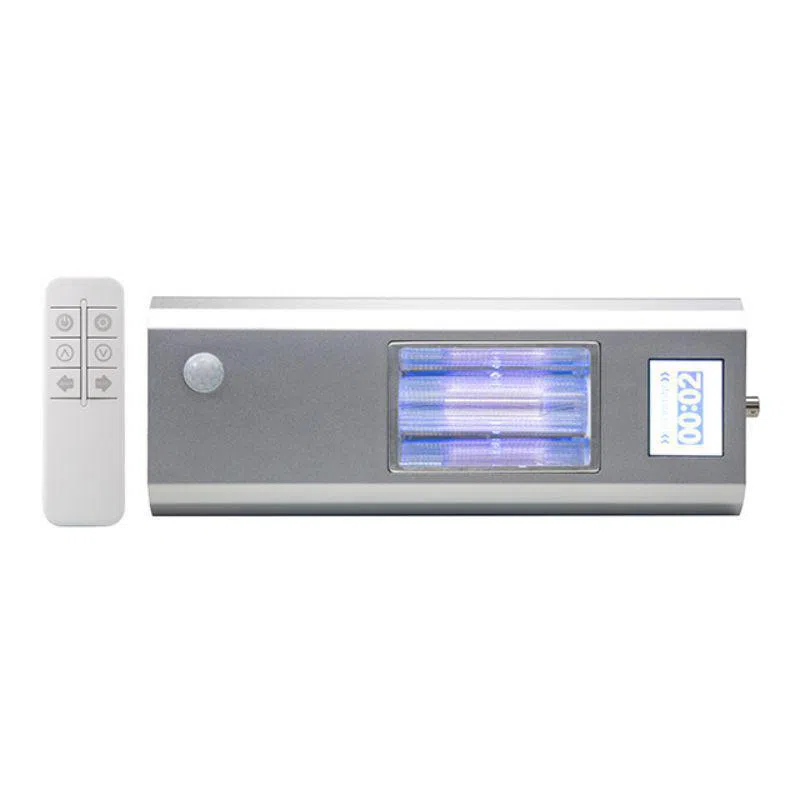