As the traditional LED industry has entered a mature and saturated period, manufacturers have adjusted their development strategies successively to expand market segments such as automotive lighting, plant lighting, UV LED, IR LED, and new display fields such as small pitch and Mini/Micro LED. Among them, in the field of UV LED, although many manufacturers have long established their layout, the market acceptance of UV LED products was not high in the past. Therefore, the UV LED industry has been in the initial stage of development, especially the relatively more technically difficult and relatively expensive UVC LED.

However, since the global spread of the COVID-19 pneumonia epidemic, consumers’ awareness of sterilization and disinfection has rapidly increased. The epidemic prevention business opportunities have driven a surge in demand for UVC LED series products, which has promoted the global investment in research and development of UVC LED technology, and has also given birth to a variety of Products, but do these products meet the relevant requirements?

In fact, many factors need to be considered in the selection of reliable UVC LED products. For example, for different viruses and bacteria, different doses and irradiation times are required to achieve disinfection and sterilization effects. From the perspective of product production, there are many considerations in every link from epitaxial chips to packaging to finished products. We will reveal the materials, processes, technical problems and development trends required for UVC LED packaging in order to better understand UVC LED packaging products. Organic encapsulation uses organic materials such as silica gel, silicone resin, or epoxy resin, and mainly includes products such as Lamp, SMD, and ceramic molding. The overall technology is relatively mature, but the UV resistance needs to be further improved.

At present, semi-inorganic packaging products are still the mainstream in the market, mainly composed of ceramic holders with cups and quartz glass. The placement of lenses is achieved by coating the edge area of the ceramic substrate with cups with anti-ultraviolet glue. Specifically, the glue is dispensed on the top of the cup or on the steps, and then covered with quartz glass for curing and bonding.

In the selection of materials, UVC LED packaging is different from general LEDs. First of all, the choice of quartz glass is because quartz is an inorganic substance and will not be affected by ultraviolet rays, and quartz glass has a high transmittance to the UVC band. Secondly, in terms of heat dissipation substrates, due to the low photoelectric conversion efficiency of UVC LEDs, most of which are converted into heat, aluminum nitride heat dissipation substrates with high thermal conductivity are generally used. In addition, UVC has a bad effect on glue. Therefore, the requirements for the UV resistance of the glue for bonding the glass and the bracket are higher than that of the general LED package. UVC LED is sensitive to heat, and its external quantum efficiency (EQE) is low. Only a small part of electric energy is converted into light, and most of the electric energy is converted into heat, which directly affects the service life of the chip. In view of this, at this stage, many products are based on flip-chip solutions with high thermal conductivity aluminum nitride substrates. Aluminum nitride has excellent thermal conductivity, can withstand the aging of the ultraviolet light source itself, and can meet the needs of high thermal management of UVC LEDs.

Although the bonding force of silver paste soldering is good, it is easy to cause silver migration and cause device failure. As for solder paste soldering, since the melting point of the solder paste is only about 220 degrees, it will remelt after the device is placed in the furnace again, and the chip will easily fall off and fail, which affects the reliability of the UVC LED.

Au-Sn eutectic soldering mainly uses flux to perform eutectic soldering, which can effectively improve the bonding strength and thermal conductivity of the chip and the substrate. In contrast, it has higher reliability and is beneficial to the quality control of UVC LEDs. Therefore, the gold-tin eutectic welding method is mostly used in the market.

In terms of reliability, the packaging form is one of the influencing factors, but the key is air tightness. In the semi-inorganic package form, the glass lens and the ceramic substrate with a cup are connected by glue to form a closed cavity. Since the closed cavity cannot be vacuumed, when the glue is thermally cured, the air in the cavity is easily heated to expand and overflow, forming bubbles, and forming air channels in severe cases. At this time, external water vapor and impurities can enter the product through bubbles and air channels, causing pollution to materials such as chips and substrates, seriously affecting the air tightness of the product, and thus affecting the light emission and reliability. Therefore, air tightness has a great influence on the quality of UVC LED packaging, and the process technology is very important. 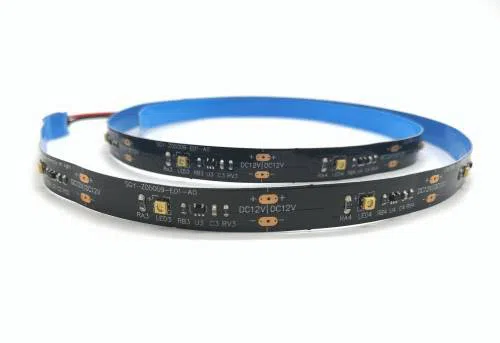