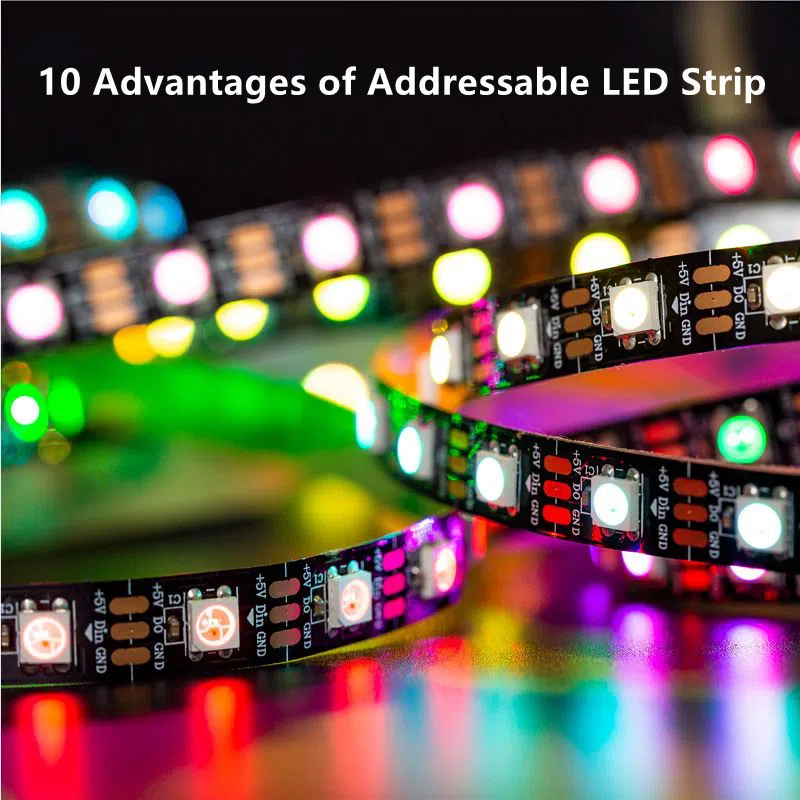 1.Do you know what an addressable LED strip is?

2.How does the addressable light strip work?

3.The advantages of addressable LED Strip.

With the advancement of the technology of the LED industry, LED flexible light strips are environmentally friendly, small in size, and highly reliable functions are gradually emerging from other characteristics. In places where electricity costs are high and the use time is longer, LED light strip have quickly become the new favorite of shopping malls.

If you are looking for a dynamic solution to meet your lighting needs, addressable LED strips are a very suitable choice. Addressable RGB LED strips provide a variety of specifications and countless control options. 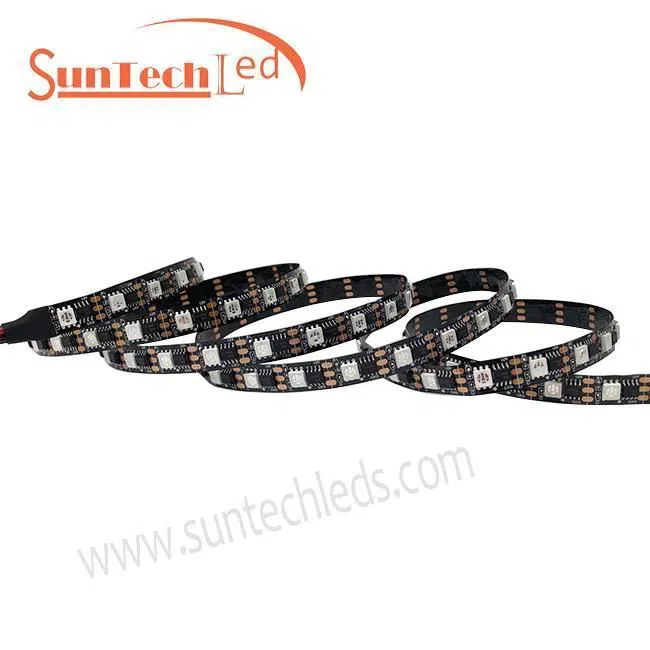 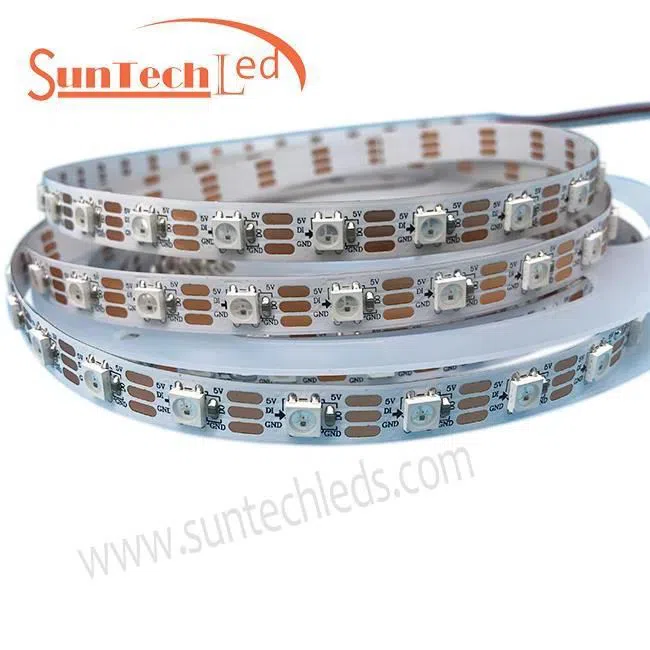 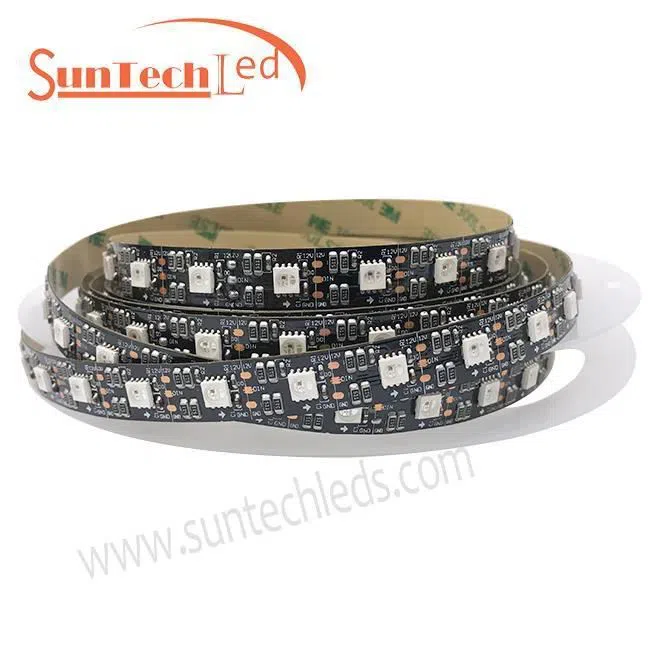 1.Do you know what an addressable LED strip is?

2.How does the addressable light strip work?

An addressable RGB light strip is composed of integrated circuit chip, LED, controller and power supply.All LEDs (red, blue and green) have dedicated ICs that can be individually addressed.The controller has a data channel for relaying commands.

The LED strip itself cannot do anything, the user must control them through the GPIO pins on the microcontroller and the programming code.Several libraries of different types of LED strips are provided, which can be used to develop code.By using these libraries, users can not only address each LED, but also have better color and brightness control for each LED.

This is the step-by-step process of addressable RGB LED strips:

3.The advantages of addressable LED Strip:

The addressable LED strip uses low-voltage DC 5V,12V power supply voltage, so it is very safe to use. The elderly and children can use it with confidence, and there is no safety hazard. 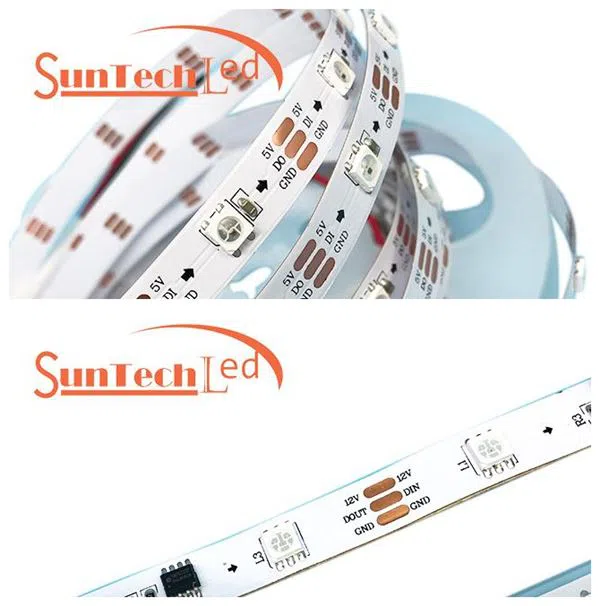 No matter whether it is LED or FPC, the raw materials of the LED pixel strip are selected environmentally friendly materials, it can be recycled and will not cause environmental pollution and damage due to large-scale use.

The power of the DC12V 30LEDs/m 5050 strip lights is 7.2W per meter. Compared with traditional lighting decoration lights, the addressable LED strip has much lower power and better effect. 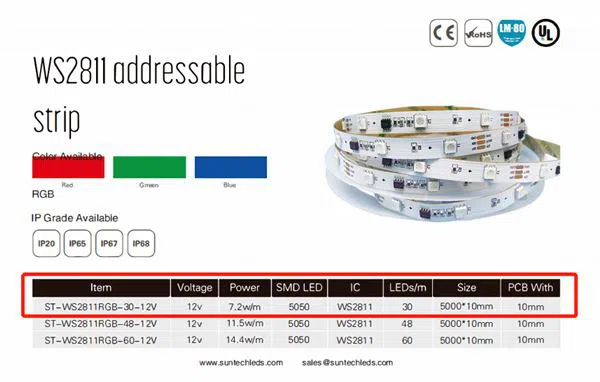 The light-emitting of the LED strip element is LED. The power of a single LED chip is very low, generally 0.04-0.08W, so the heat generation is not high. Not only can it be used as decoration lighting in the fish tank, but it will not generate a large amount of heat to increase the water temperature and affect the growth of ornamental fish.

The normal operating life of the addressable LED strip is 80,000 to 100,000 hours. With continuous operation 24 hours a day, its lifespan is almost 10 years. Therefore, the life span of the LED pixel strips is several times that of traditional lamps.

The LED pixel strip uses a very soft FPC as the substrate, which can be bent arbitrarily without breaking, is easy to shape, and is suitable for various advertising modeling needs, it can be arranged arbitrarily according to space layout requirements.

The stip led lights is very easy to install. It can be installed on various supporting surfaces with fixing clips, wire grooves, iron wires, iron nets, etc. In addition, due to the light and thin led strips, the use of double-sided tape can also achieve a fixed function. It can be installed without professionals, and can truly enjoy the fun of DIY decoration. 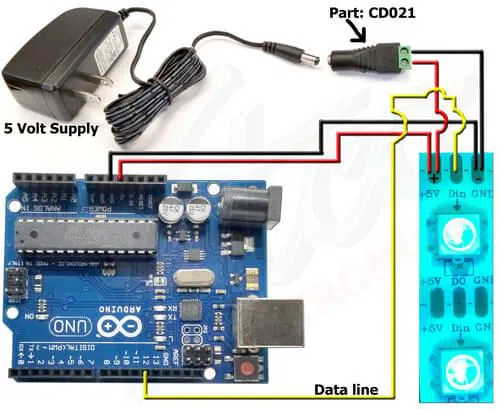 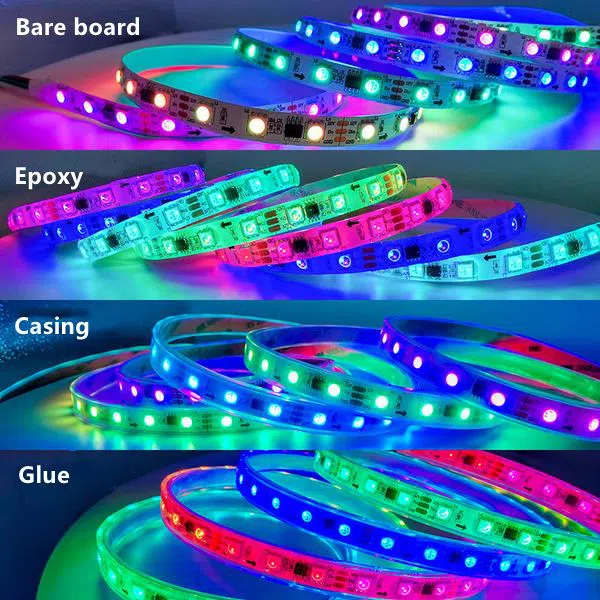 In recent years, scientists have discovered that in addition to emitting visible light to provide a bright light environment, different wavelengths of light can cause damage to the skin and eyes of the human body. In addition, light can also regulate the secretion of melatonin from the pineal gland through the third type of sensory cells (ipRGC), thereby adjusting the body's circadian rhythm. Therefore, it is of great practical significance to advocate health, emphasize the biological safety of light, and improve the quality and comfort of light. L-band luminescence, not only can meet the rooting, sprouting, flowering, and fruiting of various plants, but it will not cause harm to the human body.

Where to buy addressable light strip?

Please contact Suntech LED, after 8 years of development experience, the Suntech LED engineer team has successfully developed a variety of different programmable products, such as WS2813, SK6812, WS2811, WS2812B, DMX512 smart light strips, and the products are exported to the Americas, Europe, the Middle East and other markets, they accept Bulk orders, and can manufacture addressable light strips according to customized requirements.