Excimer It refers to a temporary atomic state in which high-energy atoms form short-lived molecular pairs or dimers when excited by electrons. Excimer stands for "excited dimer", in other words, is a dimer (such as Kr-Cl, Xe-Xe- and other gases). When the excited dimer returns to its original state, the remaining energy is released in the form of ultraviolet UVC photons.

In the 1960s, the new compound term "excimer" appeared in the scientific community. It is generally believed that the term excimer can be used to describe the formation of excimer and excimer radiation. A description of the accepted term for dimers. Excimers can exist in the form of excited electronic states within a limited time, usually ranging from a few nanoseconds to tens of nanoseconds. After that, the excimer jumps to the base electron state, and at the same time, it releases internal electrons with different forms of photons to excite the energy inside. Excimer technology plays a great role in many industrial sectors and applications. 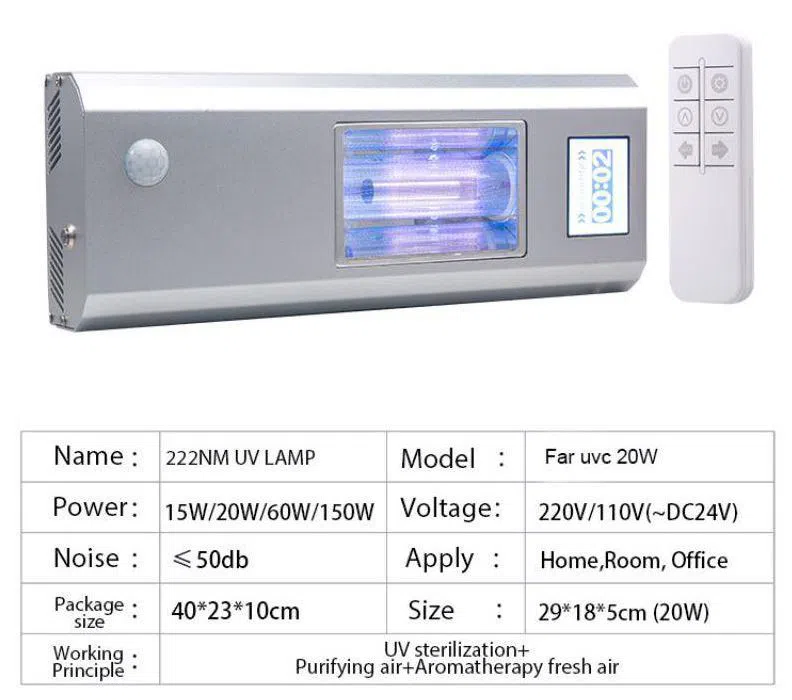 The Far UVC excimer lamp is currently a relatively new technology. Scientific authoritative research shows that: far-ultraviolet radiation with a wavelength of 222nm is not only harmless to human skin and eyes, but also does not contain harmful substances such as mercury, and does not produce ozone, achieving the goal of environmental protection and safety. In the experiment of sterilizing and disinfecting the skin, the bactericidal effect of 222nm far-ultraviolet light is quite good. They used a filter to emit 222nm ultraviolet radiation.

Shenzhen Suntech Company Limited’s 222nm lamp comes with a proprietary safety filter. The short-pass filter can block the emission of ultraviolet wavelengths (200nm and below, 230nm and above) that can penetrate human eyes and skin. This is the other 222nm and A particularly important characteristic of far UVC emission products does not.

In addition to the 222nm excimer lamp, we also provide 222nm Far UVC Excimer Light Tube, but the tube does not have a UV Filter 222 nm, and some other bands may be produced.

Look at the image below, this is the intensity value corresponding to different distances. 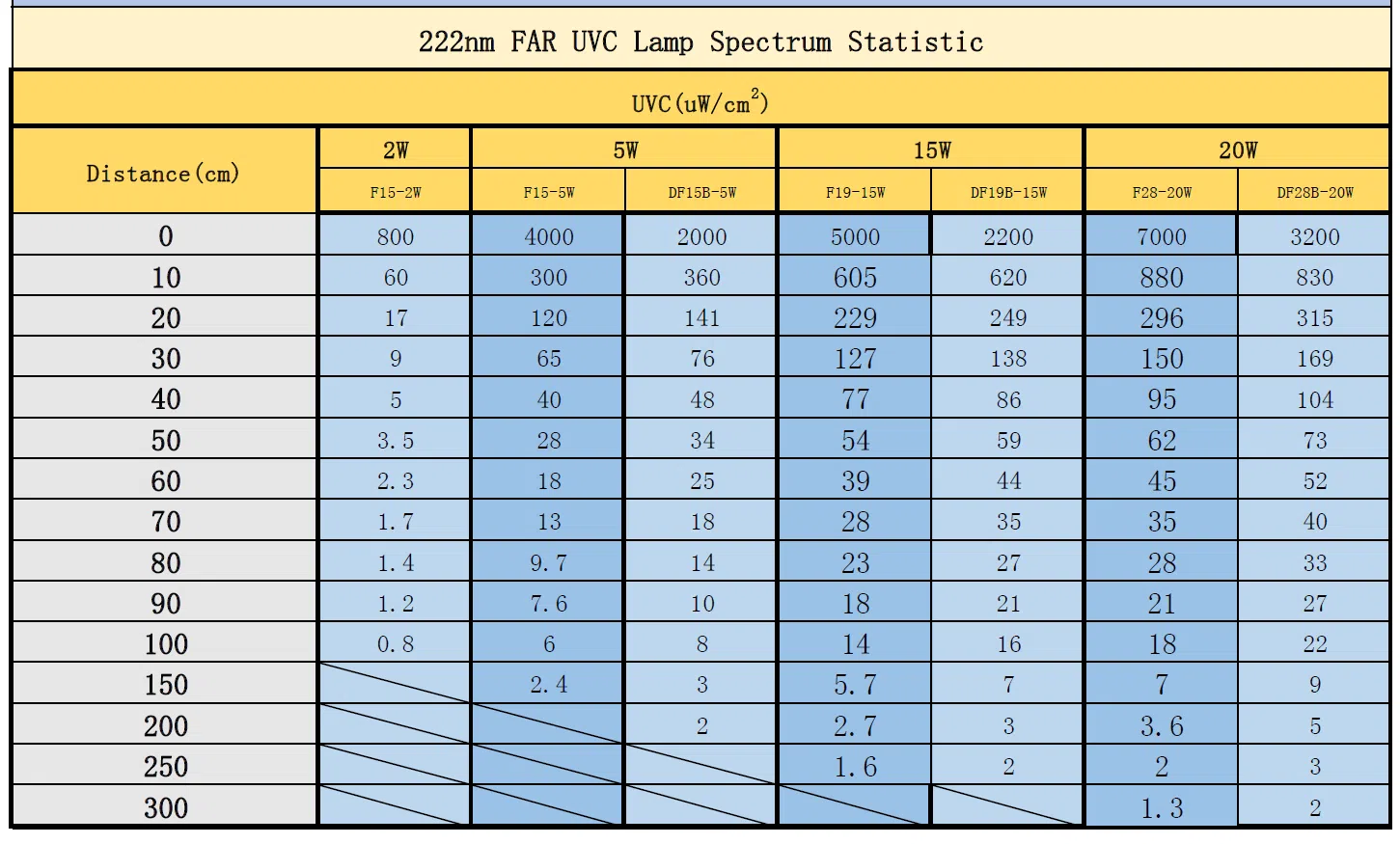 The filtered 222nm far-ultraviolet technology can be used wherever people interact and gather together.

The ideal application is that the goal of this continuous air and surface disinfection technology is that pathogens should be inactivated as soon as they enter the space. 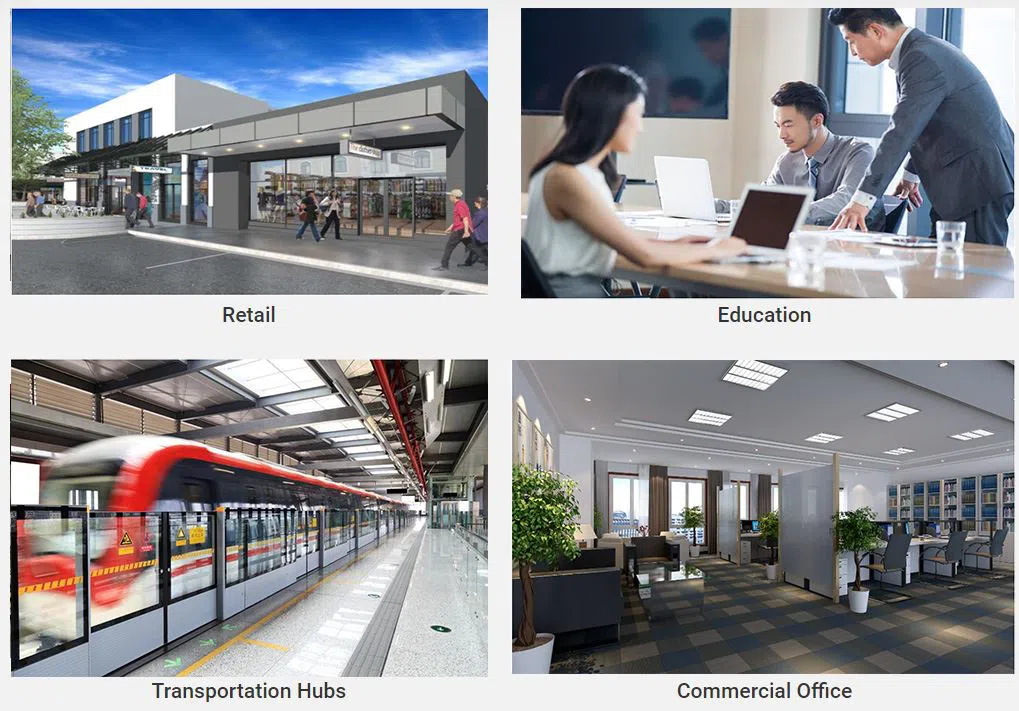 3、Surface modification of textiles. Used to increase the air permeability and moisture absorption effect of the fabric surface

5、In the printing industry, the process of cold UV printing light drying and curing is particularly suitable for printing heat-sensitive materials, paper and film

222nm UVC light can kill the coronavirus and is harmless to the human body?

Since the outbreak of the novel coronavirus pneumonia in 2019, many countries around the world have invested a lot of time and energy in researching disinfection and sterilization technologies. Research on whether deep ultraviolet rays can kill the coronavirus has also been ongoing. At present, there have been some scientific studies that prove that UVC technology can effectively and reasonably kill the coronavirus.

For example, Violeds UV LED technology has been proven to successfully kill 99.9% of new coronaviruses within 30 seconds. In addition, a sterilizing high-power UVC LED lamp released by Texas LED company Atomic Blue has been tested by the National Institutes of Health in a high-standard laboratory. It disinfects N95 masks and steel surfaces, which can eliminate 99.9999%. New coronavirus.

Recently, according to foreign media reports, tests conducted by Columbia University in the United States have also shown that far-UVC (far-UVC) light can kill coronavirus and bacteria on the surface within a few minutes.

The report shows that the research team at Columbia University's Radiology Research Center is conducting experiments on far UVC light. According to researchers, the far UVC wavelength is 222nm, which is safe and harmless to the human body and can still kill viruses.

According to David Brenner, the head of the research center, far UVC with a wavelength of 222nm cannot penetrate the skin surface or eyes, which means that it can be used in crowded and enclosed spaces with a high risk of pollution, and can be used during the current novel coronavirus pneumonia epidemic come in handy.

•NON-TOXIC -There is no toxic mercury vapor in the lamp and no harmful gas is produced.

•NO HF- and other acids, and will not produce toxic organic solvents due to the use of bulbs.

•PROCESS FRIENDLY- mercury vapor will not harm the vacuum process.

•NO FLUIDS- Process does not require fluids with consequent de-sorption and contamination problems.

•LOW ENERGY CONSUMPTION- Can be greater than 10%.

•BETTER THAN LASERS - Excimer lasers are typically only 1 to 3 % efficient.