Burj al Arab is based in Dubai, UAE. It is a landmark building designed by WS Atkins and Partners Overseas architects. Designed to be as light as a sail, Burj al Arab is unique in every way, including the custom hotel lighting scheme. World-renowned for its quality of service, luxury and prestige, it is known as the only seven-star hotel in the world. And at 321m (1053 feet) high, it is also the tallest hotel in the world.

Every night, Burj Al Arab offers a colourful light show. The changing hues and brilliant strobe effects attract millions of tourists to Dubai every year. The new strobe effect of the sail-shaped building is the highlight of the current Burj al Arab hotel light show. The new pure white strobe light utilizes the most advanced outdoor facade lighting fixtures. This ensures significantly lower maintenance costs and energy consumption as well as longer service life. For operators, the new LED strobe light is up to 85% more energy efficient than its predecessor. The new strobes are individually integrated into burj al arab lighting system. They are controlled via DMX and pre-programmed to fit the rest of the evening light burj al arab light show. The following is a brief introduction to Burj al Arab hotel lighting solutions, let's read on!

With a total of 14,000 dimming circuits, Burj al Arab is the largest architectural lighting system integration ever. Besides the lighting of corridors, balconies, public areas and burj al arab lobby, there are 202 hotel room lighting in the hotel. Each suite has one or more dimming control systems to operate the hotel lighting fixtures in each room, with the largest suite having five systems providing a total of 160 lighting channels. The dimmer racks that control all landings are networked together and operated through a custom graphical interface. The many unique automated features requested by hotels provide added convenience to guests. 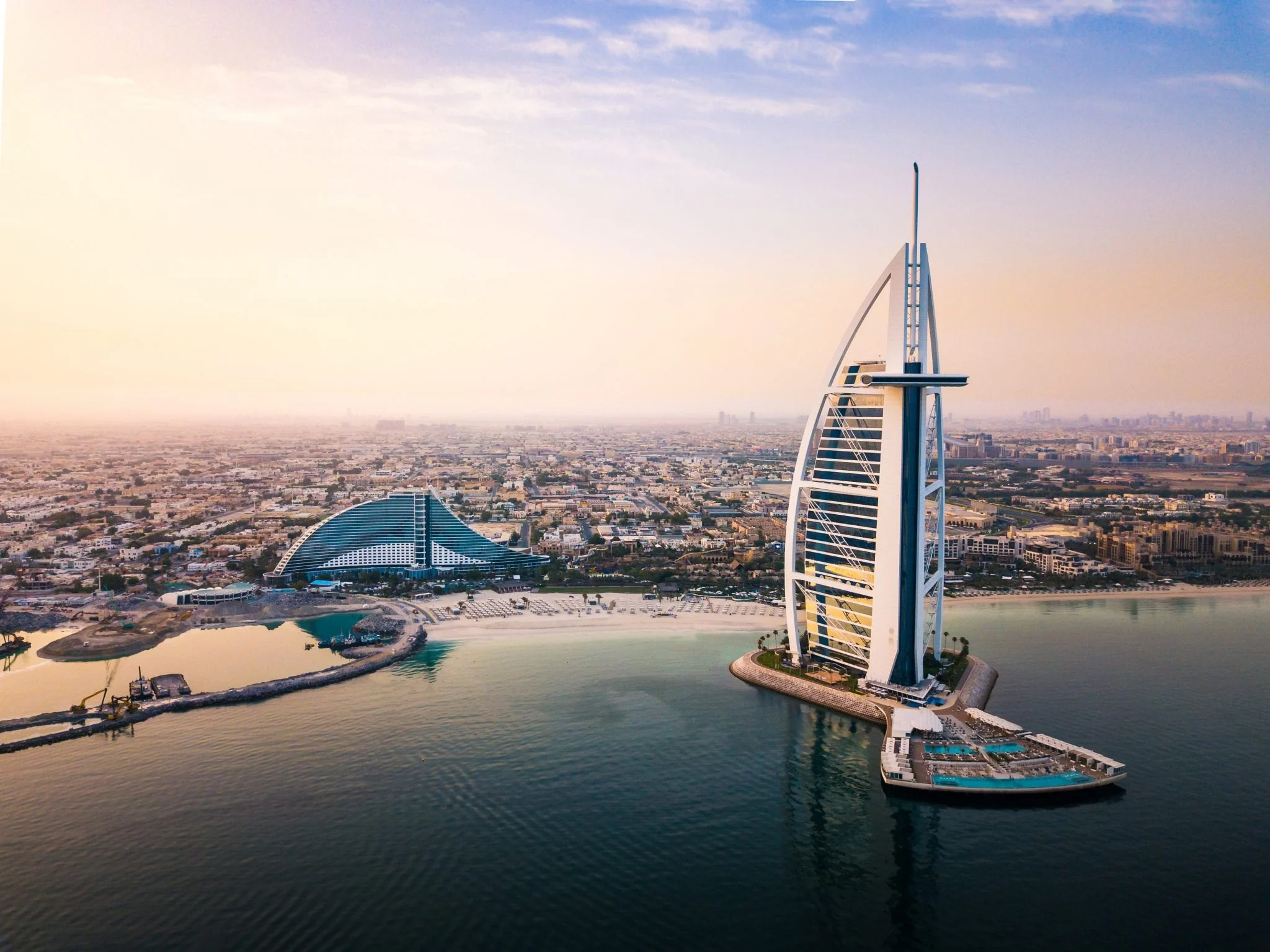 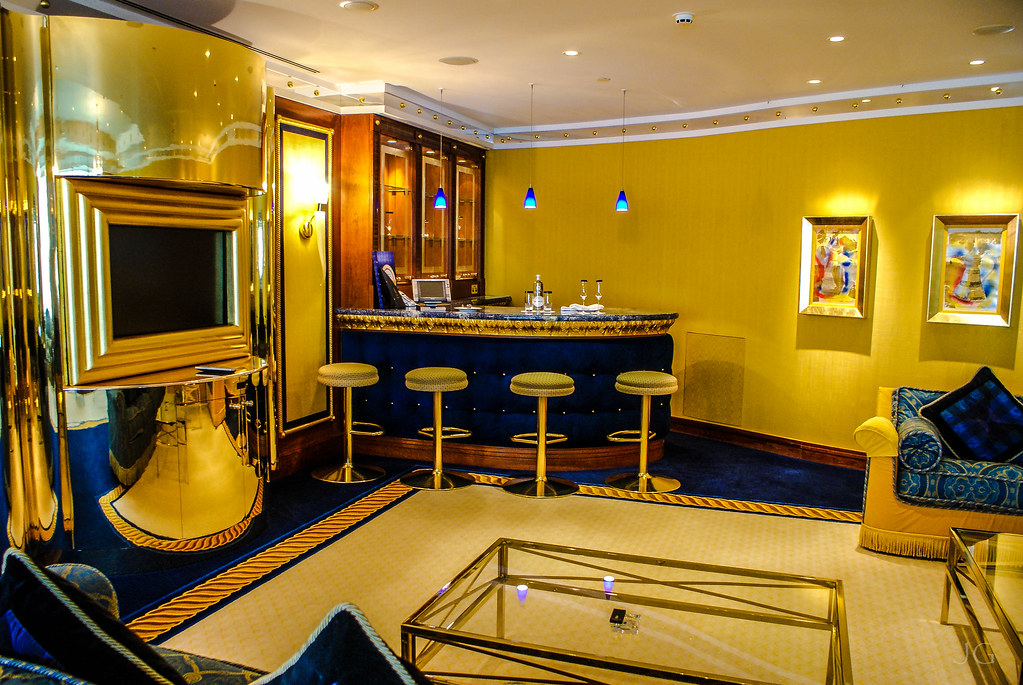 The entire modern hotel bedroom lighting is controlled by the world's largest architectural lighting system, allowing individual control of all rooms at the touch of a button. The bedroom features dedicated control panels on either side of the bed, offering convenient innovations such as "light trails". When the guest presses the always-on button on the panel, the nearest desk lamp will lightly go out, and the lights in the room leading to the bathroom and in the bathroom itself will also slowly go out. The lamps in each room are equipped with a lamp controller and operate as part of scene dimming. The scene of each room can be selected from the switch panel, in addition, the brightness of the desk lamp can also be set individually. Every suite, large or small, is a model of technological excellence. Communications are comprehensive, from fourteen telephones in the one-bedroom suite to twenty-seven cell phones in the two royal suites, as well as internet, private copiers and faxes in all suites. Over 100 computer controlled cable channels, video on demand, live recording, surround sound and large plasma screen TVs. Indoor automation, including monitoring systems, curtains and air conditioning, are all operated by remote control. These are burj al arab functions and designs.

Burj al Arab architect has placed two luxury suites on the 24th floor with an entrance reception, while the lower level houses lounge, dining and kitchen areas, an office and two bedrooms. The elevator upstairs is the master bedroom, decorated in royal purple and gold with hand-embroidered wall paneling, and adjoining the dressing room and bathroom. Upstairs there is a second bedroom with an ensuite. The two Royal Suites on the 25th floor are some of the most luxurious hotel rooms in the world, each with a private cinema and state-of-the-art lighting controls, audio-visual equipment. The majlis (meeting) area with leopard-print seating is illuminated by wall sconces up luminaires. Each suite has two luxuriously furnished bedrooms upstairs, one of which has a slow-swivel bed. 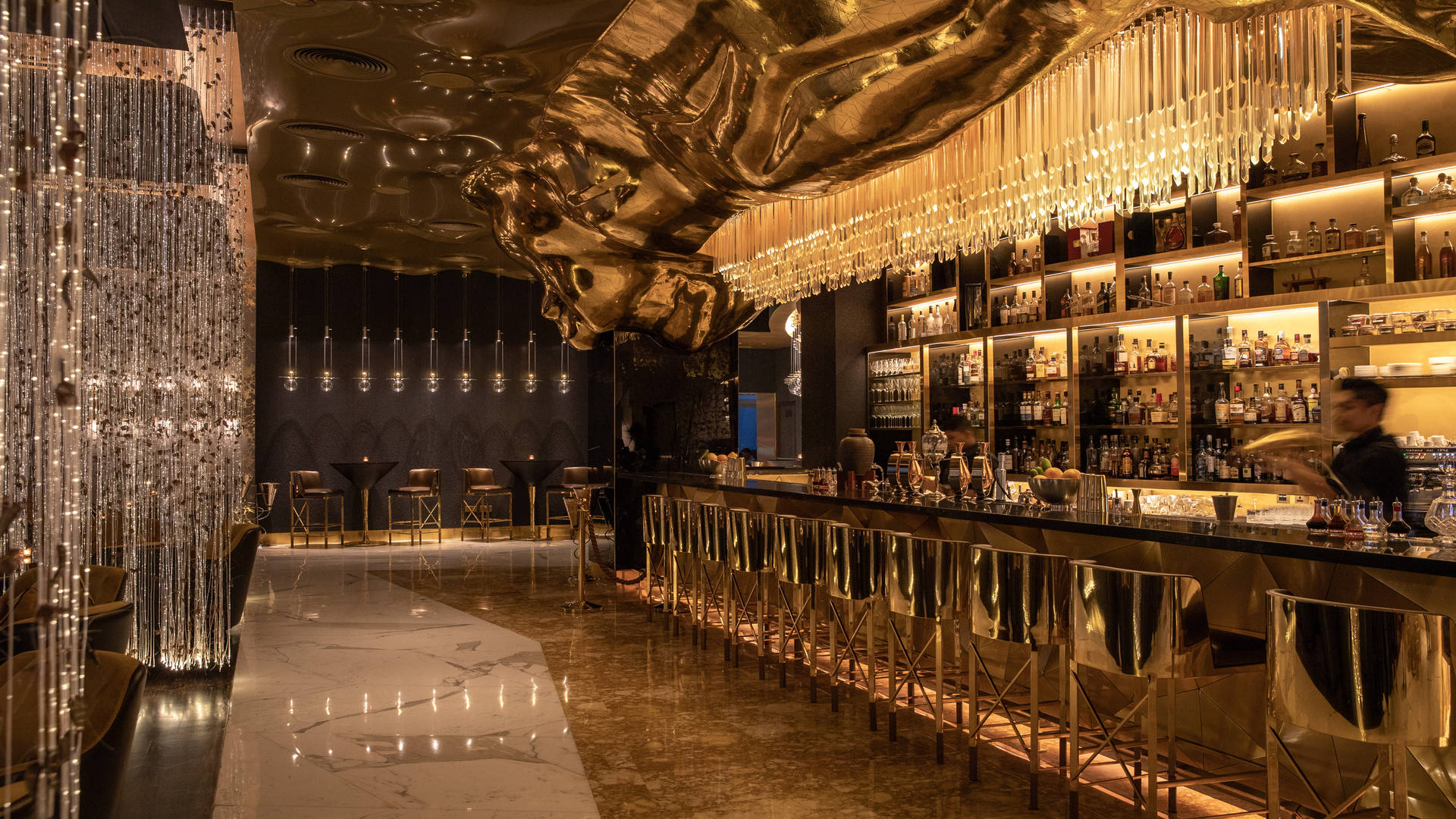 The stunning chandelier consists of 210 crystal tubes and weighs around 450kg. Designed by KCA International for Jumeirah Group, the exit lobby of Burj Al Arab has been refurbished with an ornate spiral chandelier as the bespoke centrepiece of the interior – Hotel lobby lighting. The installation is designed to complement the light, creating a luminous artwork at the center of the space. The device seamlessly integrates traditional craftsmanship with the latest nanocoating technology. Using cutting-edge technology, each glass tube is painted in gold and engraved with a unique leaf pattern taken from luxury hotel wallpaper.

A stunning fire and water show at the hotel entrance greets guests before entering the ornately decorated lobby. The entire design is nautical themed, the interior is as opulent as the exterior, with meticulous attention to detail in every fixture and furniture. Granite and marble, textiles and rugs, artwork and sculptures are Arabic themes made exclusively for hotels around the world. Double escalators along the walls of the massive reef aquarium ascend from the lobby to the mezzanine with a spectacular waterfall of lights between them. The mezzanine level houses the hotel's exclusive boutique, as well as the "Sahn Eddar" Atrium Lounge and the "Al" Ivan Restaurant. 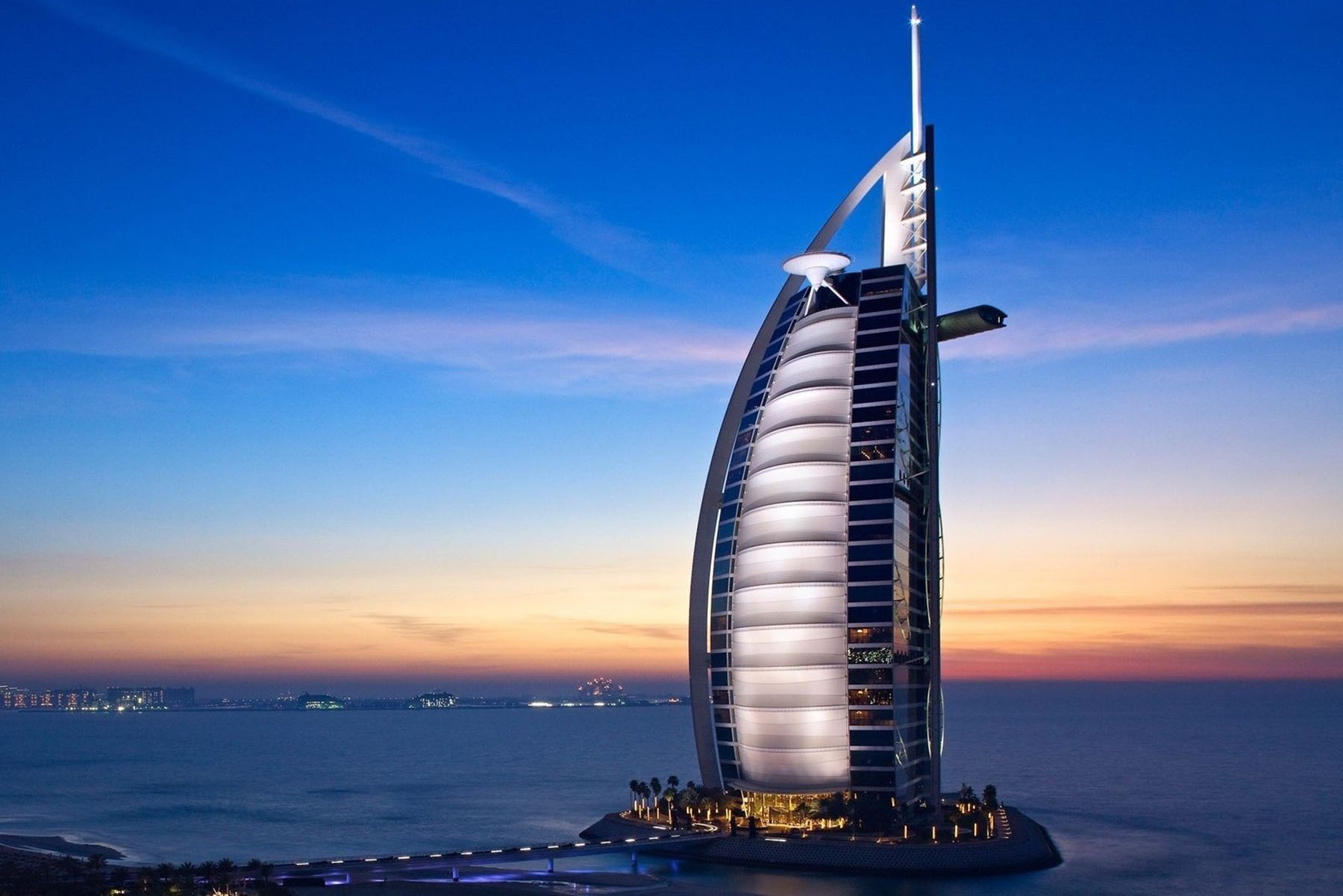 The perfect combination of futuristic design and technology with Arabic heritage has amazed tourists from all over the world. "Building the burj al arab" - fulfilling the vision of General Sheikh Mohammed bin Rashid al Maktoum - stands on a man-made island 280 meters offshore in the surf of the Arabian Gulf. Billed as the most luxurious hotel in the world, Burj Al Arab spans just under 2 million square feet in the United Arab Emirates. The iconic hotel has been photographed as one of the most photographed buildings in the world, and has attracted a lot of attention for its excellent service.

Burj al Arab looks two massive arched pillars radiate from the central "mast" - linked by a "sail" to form a massive 60-storey atrium - studded with spotlights like crown jewels and coloured exteriors at night Light cleaning. The dazzling white "sails" - made of double-layer Teflon-coated woven fiberglass - are illuminated by 142 floodlights at night, creating a dramatic light show visible from miles away. 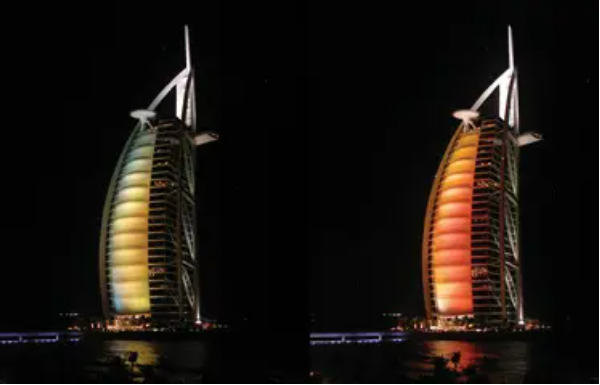 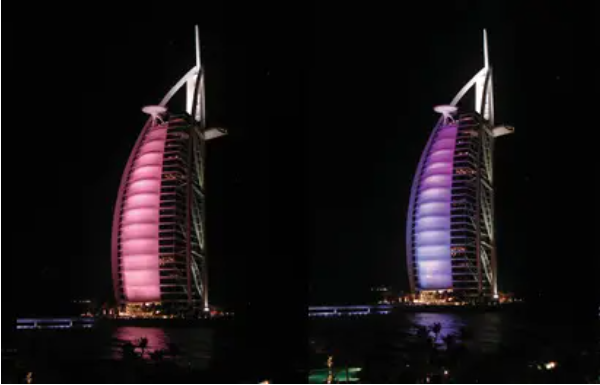 Burj al Arab light show time – the exterior colour of the building changes every 15 minutes; half an hour has a more dramatic sequence and an hour has a longer, slower and more hypnotic show. 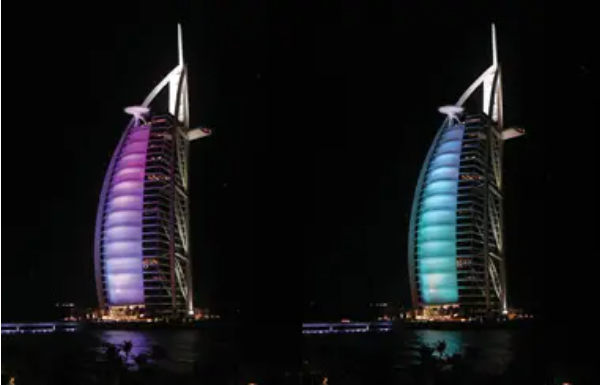 On some festival occasions, high-powered rolling projectors located in the beach paddock project dynamic images 120 meters high onto the sails. The bridge connecting the tower to the mainland is indirectly illuminated by hidden blue floodlights at its base. The bases of these embedded structures, which illuminate the water's surface, reflect back the natural dynamic light patterns created by the action of the ocean waves.