What are the advantages of LED uv curing

LED UV curing uses high-intensity electronic ultraviolet (UV) to change inks, coatings, adhesives or other light-reactive substances, which are polymerized into solids that are instantly fixed in place. LED UV curing lights is a kind of semiconductor light-emitting device that directly generates ultraviolet light. The light-emitting wavelength is a light source with a certain wavelength of 200nm to 450nm. It can be divided into two categories: LED UV point light source and LED UV line surface light source. Ultraviolet curing is a low-temperature, high-speed, solvent-free photochemical process. It uses high-intensity electronic ultraviolet (UV) light to change ink, paint, adhesive or other photoreactive substances into instantaneous solids through polymerization. "Drying" refers to the solidification of chemical components through evaporation or absorption. Ideally, through UV curing, the cured material can be firmly attached to the substrate and has a sufficient curing depth without stickiness, stickiness or flakes. 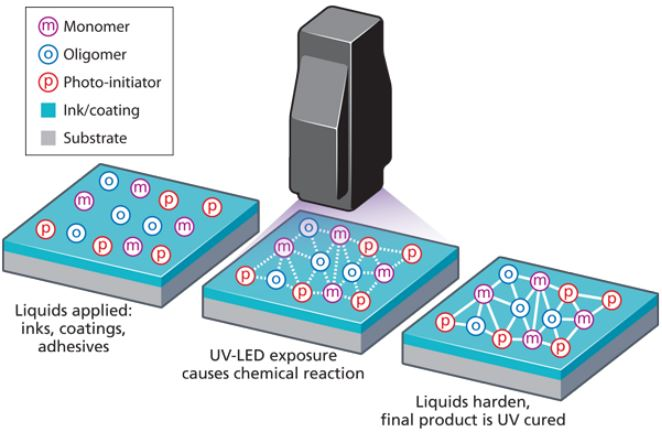 Types of UV curing include spot curing, flood curing, handheld curing and conveyor belt curing. The UV curing system uses a variety of lamps as the UV light source: a mercury-based arc lamp that produces broad-spectrum ultraviolet light; and a light-emitting diode (LED) that emits only UVA energy. Although UVC LED is an option, its power output and efficiency are much lower.

The UV LED curing lamp is composed of one or more InGaN quantum wells sandwiched in a thinner GaN structure, and the formed active area is a cladding layer. By changing the relative proportion of InN-GaN in the InGaN quantum well, the emission wavelength can be changed from violet light to other light. AlGaN can be used to make cladding and quantum well layers in UVLEDs by changing the AlN ratio, but the efficiency and maturity of these devices are poor. If the active quantum well layer is GaN, in contrast to InGaN or AlGaN alloy, the spectral range of the device emission is 350 to 370 nm. 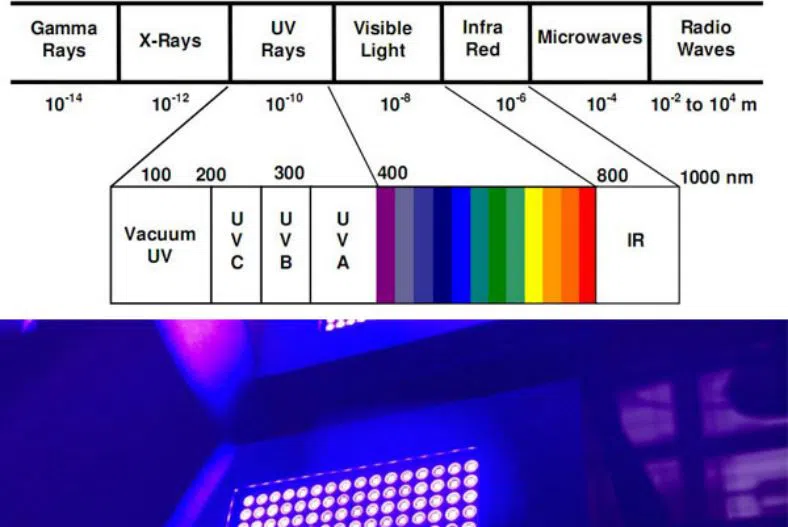 When the blue InGaN light-emitting diode pumps short electron pulses, ultraviolet radiation is generated. Aluminum-containing nitrides, especially AlGaN and AlGaInN, can make shorter-wavelength devices and obtain series-wavelength UVLEDs. Diodes with wavelengths up to 247nm have been commercialized, LEDs based on aluminum nitride that can emit 210nm ultraviolet radiation have been successfully developed, and UVLEDs in the 250-270nm band are also being vigorously developed.

3 . The heat generation is small, which can solve the problem that the mercury lamp printing equipment heats up and the staff is unbearable.

4 . Lights up instantly, no need to warm up and instantly achieve 100% power UV output.

5 . The service life is not affected by the number of opening and closing.

6 . The energy is high, the light output is stable, the uniform irradiation effect is good, and the production efficiency is improved.

7 . The energy is high, the light output is stable, the uniform irradiation effect is good, and the production efficiency is improved.

8 . It does not contain mercury and does not produce ozone. It is a safer and more environmentally friendly alternative to traditional light source technology.

9 . Low energy consumption, the power consumption is only 10% of the traditional mercury lamp curing machine, which can save 90% of the power.

10 . The maintenance cost is almost zero, and the use of UVLED curing equipment saves at least 10,000 yuan/set of consumables every year.

Outside of printing, the earliest commercial applications of LED UV were small area adhesives and bonding medical equipment assembly. Nowadays, due to the small size, light weight, and strong cold curing ability of LED UV, with the increase of energy density and the reduction of cost, the use of LED UV has far exceeded the early imagination. It has a wide range of commercial applications in graphic arts, wood coatings, electronics, composite materials, textiles, glass, plastics, household products, medicine and other markets.