Home / LED Blog / UVC LED Light / How does a UVC LED work and what are the problems in the development of UVC LED?

How does a UVC LED work and what are the problems in the development of UVC LED?

As of May 12, the number of confirmed cases of COVID-19 in the world has increased by more than 740,000, and the cumulative number of cases has exceeded 160 million. SARS-CoV-2 is a single-strand positive-strand RNA virus with highly infectious and lethal. According to the "COVID-19 Diagnosis and Treatment Plan" promulgated by the National Health Commission of China, the means of inactivating SARS-CoV-2 can be divided into chemical killing means and physical killing means. Although the use of chemical disinfection is the widest, most disinfectants have toxic side effects on the human body. Compared with chemical disinfection, physical disinfection is relatively less harmful to humans, and there is no secondary pollution. Since the heating scheme will cause damage to the object to be killed, the application range is narrow. UV disinfection technology is widely used by people because of its advantages of good disinfection effect, safety and environmental protection, and no chemical residues. As a new generation of light source, LED does not contain toxic elements or compounds such as mercury, and is an effective substitute for mercury lamps in the ultraviolet band. 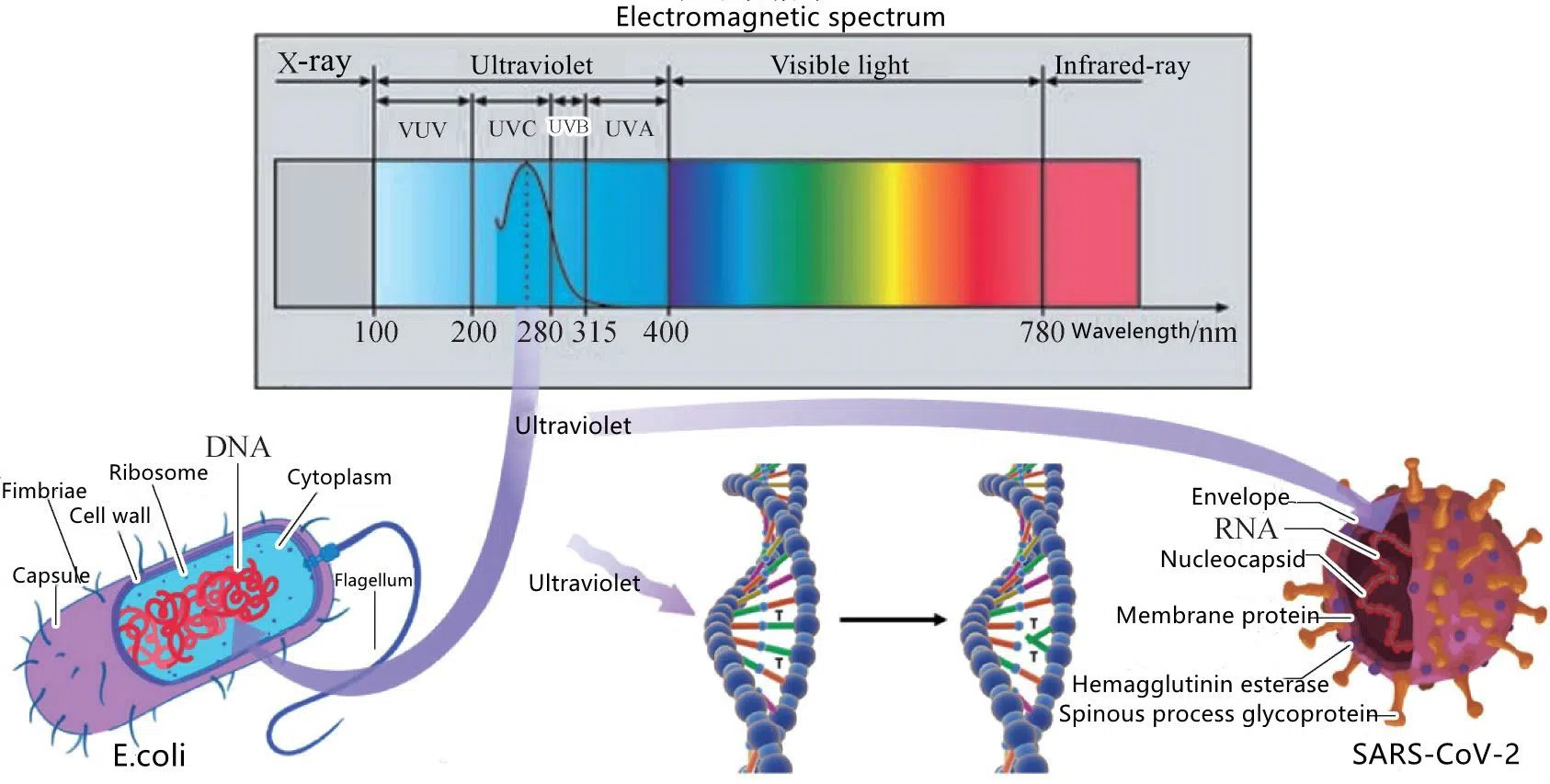 The LED is a semiconductor light-emitting device whose core is a special pn junction. The p-type layer and the n-type layer are used to inject holes and electrons into the active region between them, respectively. The commonly used UVC LED is generally a flip-chip structure, that is, the substrate leads out the light on the top, and the electrode is connected to the circuit on the bottom. This structure can achieve better heat dissipation. The structure of a typical UVC LED chip is shown in the figure below: 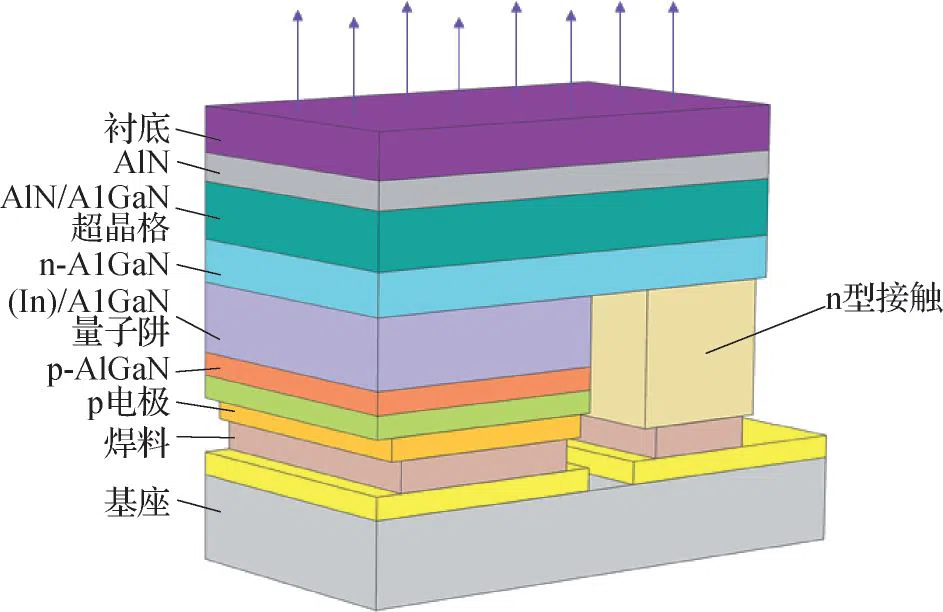 It can be divided into two parts: substrate and epitaxial layer. Among them, the substrate usually follows the sapphire substrate(Al₂O₃) used in the blue LED chip; the epitaxial layer can be subdivided into 5 parts: buffer layer, n-type layer, active area, p-type layer, and electrode. The buffer layer usually includes an AlN buffer layer and an AlGaN/AlN superlattice. The former is used to relieve local high stress caused by lattice mismatch, and the latter is used to shield dislocations caused by lattice mismatch. The n-type layer is usually Si-doped AlGaN, and the active region is usually AlGaN/GaN multiple quantum well structure. The emission wavelength of UVC LED is determined by the inherent energy band gap of the active region material. The p-type layer above the active region is a hole injection layer, usually Mg-doped AlGaN. In order to reduce the electron overflow effect under high currents, it is necessary to grow an electron barrier layer with a wider band gap between the p-type layer and the active region. Moreover, for the electrode, in addition to meeting the basic requirements for effective carrier transfer, the metal electrode of the flip-chip UVC LED must also have a higher reflectivity for UVC light. In this way, the light emitted downward from the active region can be effectively reflected to the direction of the substrate, thereby improving the external quantum efficiency. 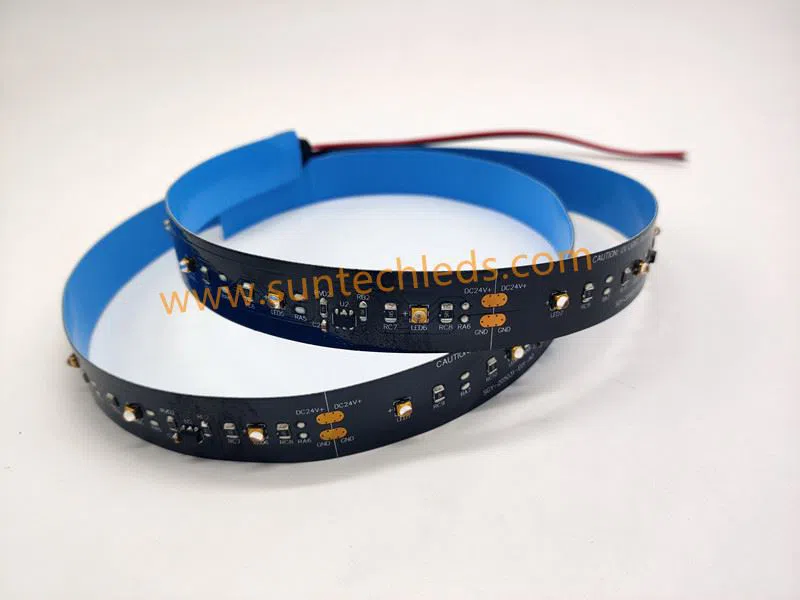 The problems in the development of UVC LED

1. The external quantum efficiency of the chip

In UVC LED sterilization and disinfection equipment, the radiation illuminance of a single UVC LED often does not meet the inactivation dose requirement, and must be compensated by multiple integrated packages. Although the UVC LED chip has a device structure similar to that of the blue LED, the higher Al composition of the former makes its chip quality significantly different from the latter. At present, the improvement of the external quantum efficiency of the UVC chip still faces the following bottlenecks:

(3) The high doping of Al component in AlxGa1-xN ternary mixed crystal is also one of the obstacles to high-quality epitaxy. The surface viscosity coefficient of the Al atom is higher than that of Gan, which makes its migration rate low during the extensional growth process. The newly grown Al cannot choose the lowest energy nucleation site for attachment, so that even with the buffer layer, there are still a large number of point defects and dislocations in the active region.

(4) In addition to optimizing the substrate and AlxGa1-xN ternary mixed crystal, it is also necessary to improve the epitaxial structure of the quantum well in the active region, so that the holes and electrons in the active region can be effectively constrained, and the overlap of the hole-electron wave functions must be improved. The use of stepped Al component barrier regions in quantum wells can effectively improve the recombination efficiency of holes and electrons.

(5) The p-type Mg doping ionization energy in the hole injection layer is too high, resulting in insufficient effective hole density.

For LED light sources, packaging not only plays a role in mechanical protection

In order to reduce costs, general lighting LEDs are packaged with cheap and easy-to-process organic resins; but for UVC LED packaging materials, the most prominent problem is that organic materials are prone to aging and yellowing under long-term UVC photon irradiation. For this reason, UVC LED packaging materials must take into account the three aspects of solidity, resistance to UV radiation, and effective light and heat conduction. In addition to using quartz glass as the lens, the combination between the lens and the chip also requires materials that are resistant to UV radiation.

The higher energy band gap and lower electrical conductivity of the p-type layer of UVC LED chips will increase the forward voltage at turn-on, causing a significant increase in electrical power. At the same time, its low external quantum efficiency means that most of the electrical energy will be converted into heat energy, causing the junction temperature to rise, further reducing the quantum efficiency, making it enter the vicious cycle of rising junction temperature, and accelerating the aging of devices and packaging materials.

To solve the heat problem, in addition to the basic means of improving the external quantum efficiency, we must also start with improving the heat dissipation efficiency. Since the thermal conductivity ratio of the Al₂O₃ substrate is relatively low, the inversion of the chip will be more conducive to heat dissipation from the substrate through the metal electrode. At the same time, welding materials such as gold-tin eutectic solder or tin-silver-copper alloy solder with high thermal conductivity should also be used.