What are the problems in UV LED in the application

Low-pressure UV germicidal mercury lamp is a traditional UV mercury lamp. Its main wavelength is 253.7 nm, which has high sterilization efficiency. The radiation efficiency is 23% or more based on the power of 18 W mercury lamp. The product life is about 5 000 h. The ultraviolet radiation intensity It will decrease with the usage time of the lamp. Although the first generation of ultraviolet light sources represented by UV mercury lamps have been widely used in many fields at this stage, they have many shortcomings: large size, high power consumption, short life span, and mercury content. In addition, the UV mercury lamp has a wide spectral distribution, and the ultraviolet spectrum only occupies a part of it, so the efficiency is low.

Deep ultraviolet LED products are UVC LEDs. The main wavelength used for sterilization is 200 ~ 280 nm, and the service life can usually exceed 20 000 h, which is more than 5 times that of traditional UV mercury lamps. UVC LED is small in size, fast in start-up, no need to preheat, concentrated light energy, easy to intelligent control, can be designed to meet different needs, suitable for a wide range of application scenarios, and has higher application flexibility than UV mercury lamps.

At present, the biggest gap between UV-LED and traditional UV mercury lamps is the optical power. To increase the optical power, the number of LEDs needs to be increased, and the cost will increase accordingly. Of course, what needs to be seen is that this gap is narrowing step by step. In recent years, the power of LED has been greatly increased, the cost has been significantly reduced, and the heat dissipation problem has been improving day by day, and it is gradually replacing traditional UV mercury lamps. More importantly, UV-LED does not contain mercury, and has the advantages of environmental protection, high efficiency, energy saving, long life, and less heat loss. With the technological advancement and power increase of UV-LED, its development and replacement momentum is unstoppable.

According to the requirements of the Minamata Convention, nearly 140 contracting states are required to ban the production and import and export of mercury-containing products starting in 2020. This convention has also prompted various manufacturers to accelerate the development and production of UV-LEDs. Therefore, it is imperative to develop new technology products to completely replace traditional UV mercury lamps. In the long run, UV LED as an ultraviolet light source will become the mainstream market in the future. Relevant data shows that the compound growth rate of the global UV-LED market from 2018 to 2023 will reach 27%. It is expected that the domestic UVC-LED sterilization and disinfection application market will develop rapidly in the next five years. 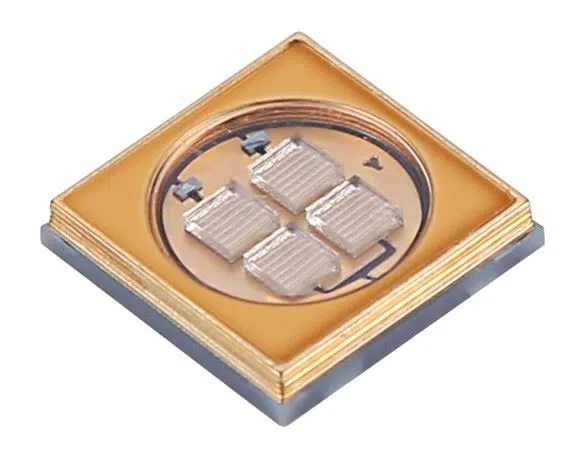 3.Problems in the application of UV-LED lamps

(1) The arrangement of UV-LED

The choice and design of the arrangement of UV-LEDs should be based on the following two considerations:

UVC-LED can play the bactericidal effect of ultraviolet rays, but it belongs to invisible light, which is invisible to the naked eye or presents very weak light, and the user experience is not so good; (2) When researchers used 272nm UVC and 365nmUVA to kill Candida albicans and Escherichia coli, it was found that the ability of UV-LED pulse irradiation to kill bacteria is significantly higher than that of traditional UV mercury lamp continuous irradiation. This is mainly because high-intensity pulse irradiation can more effectively destroy the microbial DNA structure and prevent its repair, which means the germicidal effect of UVA + UVC LED is better than traditional UV mercury lamp.

As shown in the figure below, a single device contains three different types of chips,    UVA-LED/ UVC-LED/Zener, and the Zener is used to provide ESD protection for UVC-LED. UVA can present blue and violet light in the visible light range, which can remind the user whether the ultraviolet lamp is turned on, thereby preventing the damage of ultraviolet rays to the human body, enhancing the user experience, and the high-speed modulation of UVA-LED helps pulse sterilization. 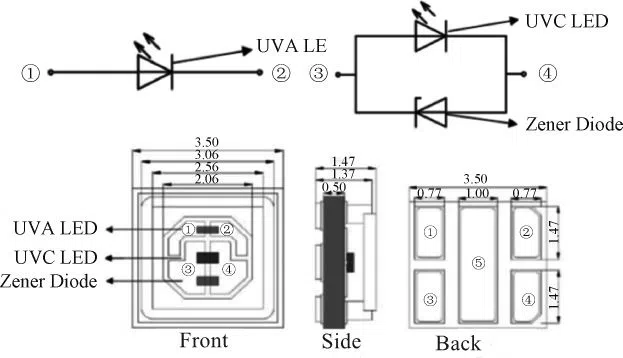