Home / LED Blog / UVC LED Light / What are the differences between UVC and Far-UVC? How Do They Kill Bacteria and suppress the spread of COVID-19?

What are the differences between UVC and Far-UVC? How Do They Kill Bacteria and suppress the spread of COVID-19? 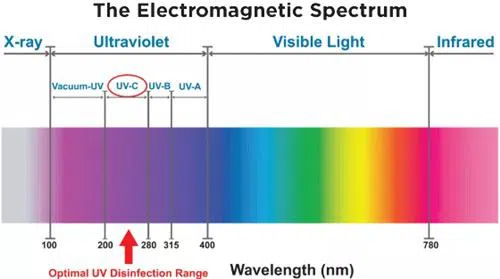 First of all, what is UVC? Just like UVA or UVB, UVC is part of the ultraviolet spectrum (above). UVC (200-280nm) can kill microorganisms that cause diseases. However, it cannot be used around people because it can cause skin cancer and cataracts. Usually, the UVC from the sun is completely filtered out by the earth's ozone layer, so there is no chance to cause harm to humans. The manufactured conventional sterilization UVC light source uses 254 nm wavelength for sterilization.

What is far-UVC? This is part of UVC light with a wavelength range of 207-222 nm. Far-UVC can penetrate the genetic material of microorganisms and destroy the bonds of genetic material, preventing its replication, thereby disinfecting objects and air. However, it does not penetrate human skin cells, nor does it penetrate the tear layer that covers the eyes. Therefore, far-UVC does not cause skin cancer or cataracts. In short, it is safe for humans, but it can kill bacteria.

What is bacteria? The term "bacteria" generally includes bacteria, viruses, fungi and protozoa. Some bacteria are harmful to you, but many are beneficial. Each of these creatures is different from each other, so there are different classifications, but there are some similarities. Bacteria, fungi and protozoa can replicate on their own and can survive without a host. Bacteria and protozoa are unicellular organisms, while fungi can be unicellular or multicellular. We use antibiotics to kill bacteria, antifungal drugs to kill fungi, and other drugs to kill protozoa (such as malaria).

But viruses are not living things. They are genetic material (DNA or RNA) encased in a protective shell that requires a host to replicate. They enter the host cell and instruct the cell's machinery to replicate the virus. Antiviral drugs can only prevent the virus from replicating, and will not "kill" or eliminate the virus in the body. The vaccine "trains the immune system to recognize and resist pathogens," allowing the body to recognize and attack invaders before they become sick.

In 2018, Colombian researchers proved that far-UVC can inactivate common influenza virus strains, "its efficiency is roughly the same as that of traditional sterilizing ultraviolet rays." Therefore, if researchers at Columbia University find that far-UVC can effectively deal with the virus that causes COVID-19 like ordinary influenza strains, it can be quickly put into application to help suppress the spread of COVID-19.