LED lamp is an electroluminescent semiconductor material chip, cured to the bracket with silver glue or white glue, and then connected to the chip and circuit board with silver wire or gold wire, and sealed with epoxy resin around to protect the internal core wire. Finally, the shell is installed, so the anti-seismic performance of LED lamp is good.

One of the most important light emitting structures of LED (light emitting diode) lamps is the mung bean sized beads in the lamp. Although its volume is very small, its function is not small. After magnifying the structure of LED lamp beads, we will find a sesame sized chip.

So, how does LED light come out? 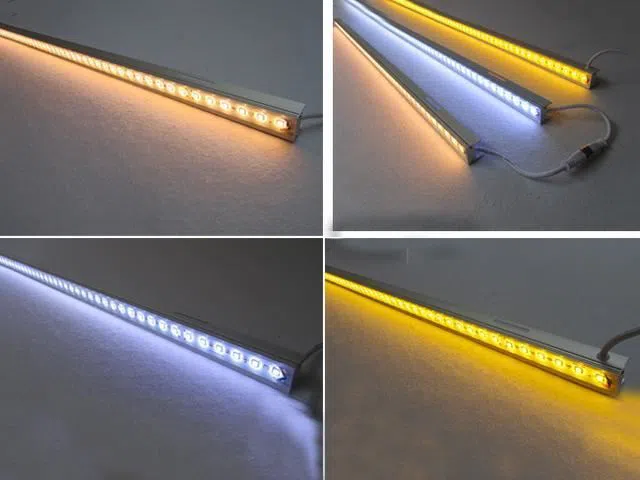 From a physical point of view: when the current passes through the chip, the electrons in the n-type semiconductor and the holes in the p-type semiconductor collide violently in the light-emitting layer to produce photons, which emit energy in the form of photons (that is, the light we see).

LED is also known as light-emitting diode, it is very small and fragile, not convenient for direct use. So the designer added a protective shell for it and sealed it inside, so as to form an easy-to-use LED lamp bead.

After many LED lamp beads are put together, a variety of LED lamps can be formed.

Semiconductors of different materials will produce different colors of light, such as red light, green light, blue light and so on. However, so far, no semiconductor material can emit white light.

But how do we usually use white LED beads?

Here we need to mention a Nobel Prize winner - Dr. Nakamura Shuji. He invented blue LED, which also laid a foundation for white LED. Based on this important contribution, he was awarded the Nobel Prize in physics in 2014.

As for how blue LED turns into white LED, the biggest reason is that there is a layer of phosphor in the chip. 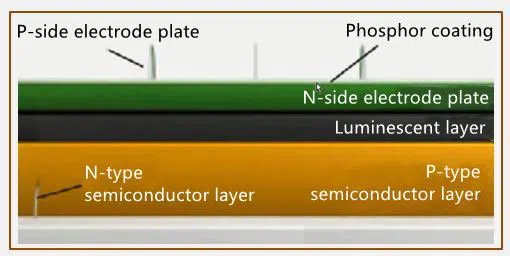 The basic principle of luminescence has not changed much: between two layers of semiconductors, electrons and holes collide and recombine and produce blue photons in the luminescent layer. 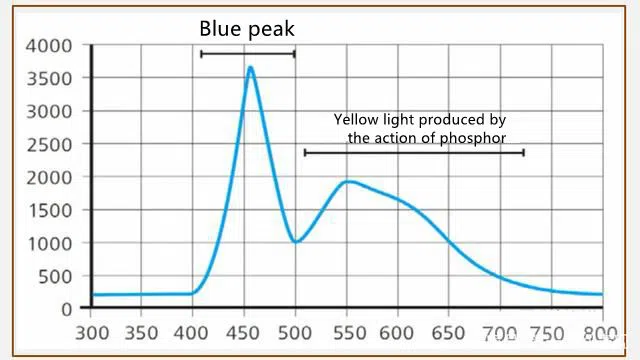 The above picture shows the spectral curve of an LED: it can be seen that the peak of blue light is at 450 nm, while the lower peak value is the peak of yellow light produced by the absorption of blue light by the fluorescent powder.