Prototype of the UVC LED irradiation system with 118 LEDs - with it germs on the skin are supposed to be killed.

A novel LED irradiation system developed by the Ferdinand-Braun-Institut aims to kill microorganisms with ultra-short wave UV light—without side effects. Prototype handed over to the Charité for initial testing. 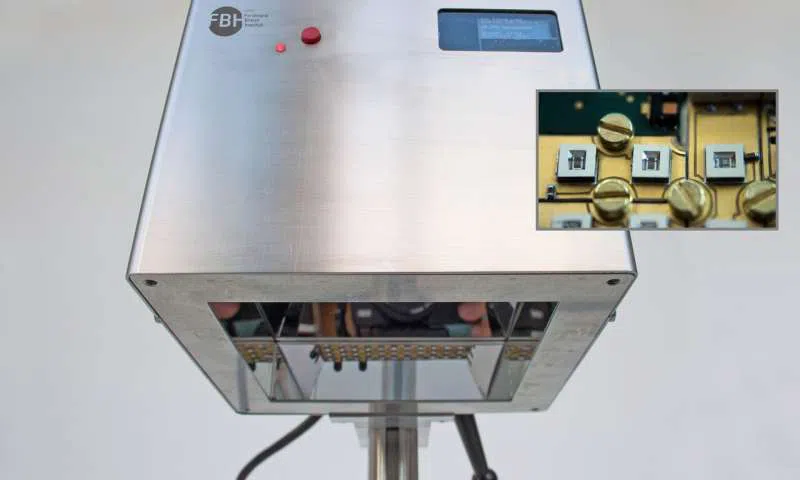 According to the Robert Koch Institute, 400,000 to 600,000 infections with hospital germs occur in Germany every year—about 10,000 to 20,000 people die from them. Since multidrug resistant pathogens often cannot be treated with antibiotics, alternative approaches are needed. One promising physical principle is irradiation with UVC light, which can be used to destroy microorganisms without allowing resistances to develop. Within the framework of their Joint Lab GaN Optoelectronics, the Ferdinand-Braun-Institut and Technische Universität Berlin have developed LEDs emitting in the far ultraviolet spectral range. The LEDs emit at wavelengths around 230 nm and provide more than one milliwatt output power. Such UVC LEDs are not yet commercially available worldwide due to technological challenges of the utilized material system aluminum-gallium nitride (AlGaN). Their light does not penetrate into the living layers of the skin because of their high degree of absorption. It is therefore expected that the skin—in contrast to long-wave UVC radiation as emitted by mercury vapor lamps, for example—will not be harmed at all or will be damaged so little that the natural repair mechanisms compensate for the effect. The researchers hope that this will help to kill MDR pathogens without any long-term side effects. Within the framework of the VIMRE project (prevention of infection with multidrug resistant pathogens via in-vivo UVC irradiation), FBH has developed and produced an irradiation system comprising an array of 118 of these LEDs on an area of 8 cm x 8 cm. It achieves a maximum irradiation power of 0.2 mW/cm2 with more than 90% uniformity over an area of 6 cm x 6 cm. The first prototype was delivered to the Department of Dermatology at Charité –Universitätsmedizin Berlin for skin examinations. Another device will soon be delivered to the Institute for Hygiene and Environmental Medicine of the University Medicine Center Greifswald to clarify the microbicidal effectiveness. VIMRE is funded by the German Federal Ministry of Education and Research as part of the consortium Advanced UV for Life within the Twenty20 program.

Tests carried out by the two project partners with these devices are intended to show that UVC irradiation is suitable for killing microorganisms and especially MDR pathogens (eradication). At the same time, it is to be demonstrated that this exposure is harmless to humans as long as specific irradiation doses are maintained. This will be verified using tissue samples of human skin as well as skin and mucosa models, since the preferred habitat of microorganisms such as MDR pathogens is the anterior nasal cavity and the pharynx. For this purpose, the Charité conducts dose-dependent investigations of possible DNA damage to irradiated skin. The University Medicine Center Greifswald will determine how effectively the UV LED emitters kill MDR pathogens at 230 nm and compare the results with those of UV lamps with emission at 254 nm and 222 nm.

LEDs have many advantages and open up further perspectives: they are particularly small and thus permit miniaturized irradiation systems. These could be used endoscopically in body orifices or as hand-held devices. LEDs also emit only little heat and hardly put any strain on the skin. In addition, they do not require high voltage—an important safety aspect, since they are used on humans. The UV LED irradiation system is to be further developed in the future so that pathogens can be eliminated in places that are difficult to access. The device might also be interesting for corona viruses, as they can also be inactivated by short-wave UVC light. Since SARS-CoV-2 replicates in the pharynx in the first phase, it seems plausible to use such light sources in this part of the body to prevent a COVID-19 disease.